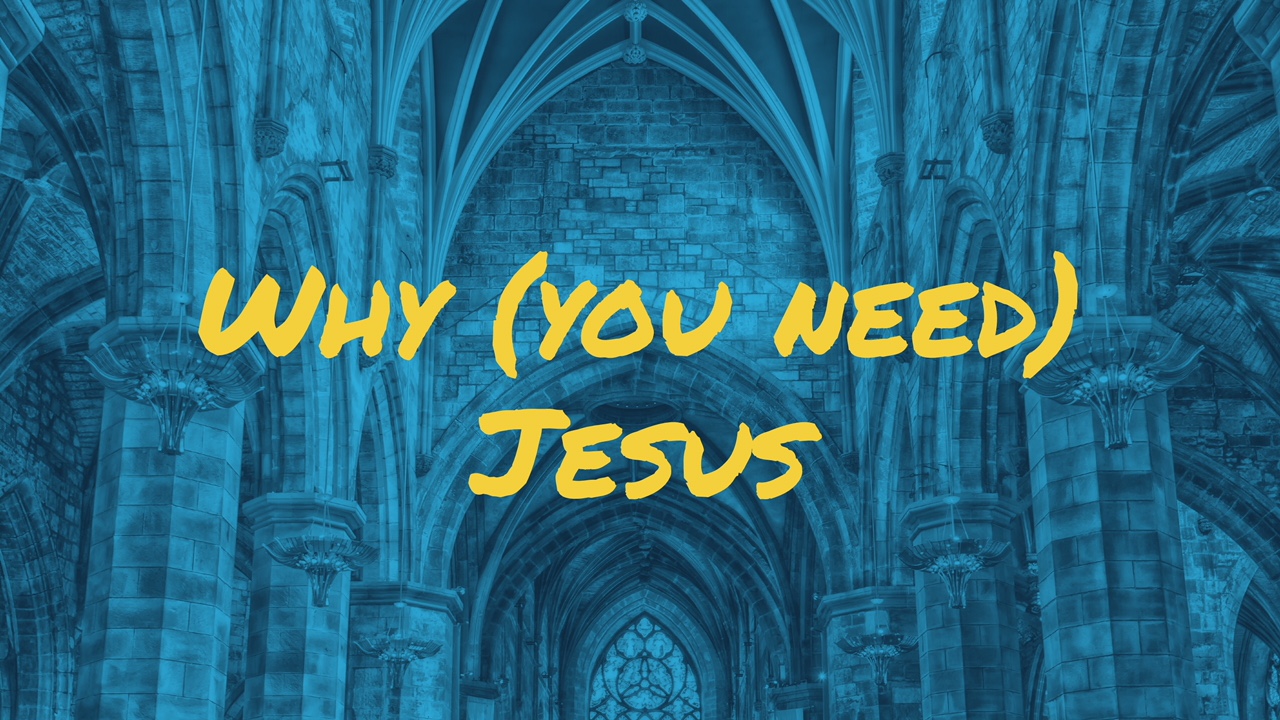 I am the resurrection and the life. The one who believes in me will live, even though they die; and whoever lives by believing in me will never die. — Jesus (John 11:25-26)

Here are the four reasons we think you need to try Jesus.

2. Death exists. We live. We die. Nothing gets in the way of a ‘full life’ like death.

3. There’s a seemingly innate desire in us to ponder our existence — and our mortality — and to find meaning in it — a ‘religious impulse’ seems hardwired in our hearts and minds.

4. Jesus exists, he lived and claimed to both be God and to show us how to truly live.  If these claims are true and we don’t believe them; not only are we missing out on the best way to live, Jesus says we’re in a bit of trouble.

Let’s flesh this out a bit more…

For since the creation of the world God’s invisible qualities—his eternal power and divine nature—have been clearly seen, being understood from what has been made, so that people are without excuse. — Romans 1:20

That seems certain. Almost everybody agrees (except Elon Musk who thinks we’re all characters in a computer program). But let’s assume that it does.

The universe is big and grand; and filled with good and beautiful things we use to find meaning and satisfaction in our lives.

Some people think the universe exists because before it exists, God existed. This isn’t a new idea; it’s pretty much as old as humanity. This idea was taken to be almost universally assumed for most of human history because it makes an elegant sort of sense.

If you take that idea seriously then you’ve got to figure out what sort of God we’re talking about, and what that has to do with the ultimate life in this world.

Maybe the question of what sort of God exists has no bearing on how we should live; maybe this creator couldn’t care less what we do with our lives and he, she, or it, leaves us to do whatever we want.

Maybe there are many gods, and the universe is a battleground for their various ideas.

Maybe God is the God that so many people think is the God revealed in the Bible — the God ultimately revealed by Jesus.

Maybe if that is the case then without Jesus you’re not just seeing the universe wrong… and so unable to find satisfaction… you’re also not living the best way for you or people around you.

If the Bible is worth listening to when it comes to talking about the meaning of life and the universe (what existence is for) then the universe is meant to reveal God’s ‘divine nature and character’ (Romans 1:20); which because we were made in the image of God is also true of the meaning of life for humans. We’re meant to live in the world and see its purpose being connected to us representing God’s character.

But if we don’t think that stuff is true we end up looking for meaning and purpose elsewhere.

2. The search for meaning

Where are you looking for meaning? For purpose? What is your picture of the ultimate human life? Have you thought about how the answers to these questions shape the way you live and love?

If there’s no god, or the Bible is just an ancient book from a dead culture then this search for meaning matters still — because what you choose will shape your life and your relationships; but if there is a God then this question is the ultimate one.

American philosopher/novelist David Foster Wallace gave a cracking speech once called This Is Water in it he made the startling claim that ‘everybody worships’ and the real choice we all face as we grow up is ‘what to worship’… He wasn’t, from what we can tell from his writings, a Christian… this was an observation about the nature of being human. Whatever we worship shapes us, and he said we need to be careful about this choice because if we pick things like sex, money, wisdom, or power to ‘worship’ we end up chasing more and more and never being satisfied.

The Bible’s warning about choosing stuff like this to find purpose in is even starker. Just after the book of Romans says that stuff about what the world is meant to do, it talks about how we humans get the world wrong. This is a neat summary of the whole story of the Old Testament, but also the story of human history.

They exchanged the truth about God for a lie, and worshiped and served created things rather than the Creator—who is forever praised. Amen. — Romans 1:25

The Bible says this decision takes us further away from the God who gives us life — and, actually, it makes him angry enough to take life away from us. We are shaped by what we worship; what we put at the centre of our loves and organise our life around… the Bible says when we put something other than God in that slot, no matter how good it is (and sex, money, wisdom, and power can all be good things), it doesn’t just destroy us, it destroys the people around us. If everybody pursues money not only do we never have enough to satisfy ourselves — all the other people in the world become competition and so we climb all over them (whether in the workplace, or in the relationship between the first world and the majority world in terms of where cheap labour and goods come from). If everybody pursues power then violence and war become ways to solve problems and to remove threats. If everybody lives for their own sexual pleasure then not only will we never be satisfied, but we get what has been called ‘rape culture’ — people using power or influence to coerce others, and big questions about consent and mutuality and what a satisfying expression of human sexuality looks like…

The choice to worship things other than God is deadly.

The Bible calls it idolatry and the first two of the famous 10 Commandments are about idolatry. The Bible says this is sin also says all other sin is a result of putting ourselves and other stuff in God’s place. Even if it is good stuff.  In fact, it earns us a death sentence from God. It leaves us facing eternal death. Separation from God.

“Although they know God’s righteous decree that those who do such things deserve death, they not only continue to do these very things but also approve of those who practice them.” — Romans 1:32

We’re all dying — the Bible suggest we were made for immortality, that the good human life is not one that ends with death but one with God for eternity. It says death is unnatural and the result of sin — of ‘worshipping’ things that do not have the breath of life in them. The Bible says this is why we need Jesus. Jesus steps in to our place when it comes to the death we deserve — but he also worships God and lives a life that shows how this changes how we live with, and appropriately love, all the other things God made — including people.

A life lived worshipping Jesus, and the God who sent him into the world (there’s this thing called the Trinity that is worth wrestling with to understand this dynamic even more), makes sense of the world like nobody — or nothing — else. Loving Jesus ultimately doesn’t lead to a death sentence from God but a life sentence. Loving Jesus means not fearing death. Loving Jesus ultimately doesn’t lead us trying to destroy others in a competition for resources, but laying down our lives in sacrificial love for others — and this is a special sort of freedom.

One of the reasons This Is Water is such a great speech is where it ends — the sort of life it commends — its vision for humanity and picture of freedom as escape from destructive defaults.

The really important kind of freedom involves attention and awareness and discipline, and being able truly to care about other people and to sacrifice for them over and over in myriad petty, unsexy ways every day. That is real freedom. That is being educated, and understanding how to think.

The alternative is unconsciousness, the default setting, the rat race, the constant gnawing sense of having had, and lost, some infinite thing. — David Foster Wallace

That ‘gnawing sense’ is something Jesus answers too — a longing to be connected to something infinite and beyond ourselves is met in the one who re-connects us with the God who put this universe together.

Why not try Jesus today?