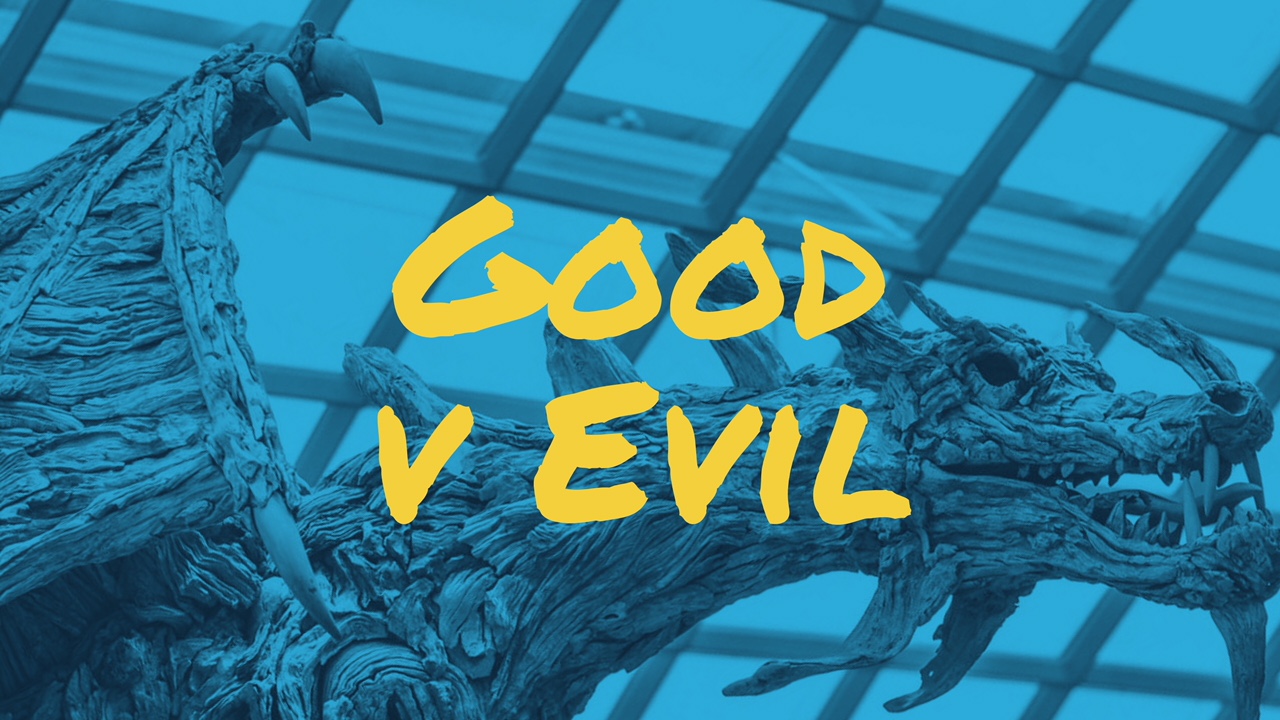 Have you ever pondered why so many of our stories — fictional, historical, and in the news — are framed as a battle of good v evil; with the eternal question ‘which will triumph’? In the news most weeks (certainly as this page was written) there are global conflicts; debates about gun laws in the United States; questions about the morality and suitability for office of politicians around the world. Even our financial stories and sports stories adopt this framework (stories about tax policies, or welfare fraud, or the ‘good news’ stories about generosity).

It’s obvious that evil exists in the world as some sort of thing we can point at and say ‘wrong’. It’s obvious that some people seem to embrace evil more readily than others and that the world is sometimes a dark place, and sometimes a light place, and the question is always ‘will light triumph’? Will dark deeds be exposed? Will investigations bring truth into the light?

We turn to our fictional stories to help us see the world a little more optimistically; to explore new ways forward; to face evil, and now, with the rise of the ‘anti-hero’ like Breaking Bad’s Walter White, if we’re honest, we start to face the evil that lurks somewhere within us. The Russian novelist Aleksandr Solzhenitsyn spent some time in a Soviet gulag as a prisoner, and wrote a famous multi-volume history of those awful prisons called The Gulag Archipelago, he said:

The Bible says he’s right. Evil isn’t just a weird force in the environment, bubbling below the surface of the earth waiting to hijack our brains to force ‘naturally good’ humans to do bad things; it’s a part of our default wiring towards self-interest. It’s the fruit of a life lived with the view that other people are objects or opponents. Some famous big-brains in the Christian world talk about our capacity for evil (or sin) as the result of our ‘hearts curving in on themselves’ instead of extending out towards others in pure generosity even our ‘good deeds’ — our love, or generosity — are tainted by this self interest (think about why so many charities now allow us to publish that we’ve participated in the ‘good deed’ of supporting their work).

The Bible also says evil isn’t just part of being human, but part of a cosmic battle that it expresses as a fight between God’s champion, Jesus, and the serpent-dragon Satan. This is a battle that begins in the first chapters of the Bible and ends in the last ones; though that last book makes a pretty stunning claim that the ultimate triumph over evil and Satan is what sometimes gets called ‘the victory of Jesus’ — his death and resurrection. If it really happened; if the Bible is true; then somehow what Jesus did was win a battle against death and evil that looks a whole lot like slaying a dragon. It’s little wonder so many of our stories feature a hero (in the Jesus role) who goes face to face with some embodiment of evil (and often you’ll see the hero die and experience resurrection too, for example, Black Panther)

Almost every story we humans create to entertain ourselves with grapples with the question of evil and leaves us hoping it might be overcome; the Bible shows us the unexpected way Jesus overcomes it — his loving, sacrificial, death; the opposite of the ‘curved in’ or self-seeking heart… and he invites us to break the cycle that perpetuates evil in this world by having our hearts changed to be like his.