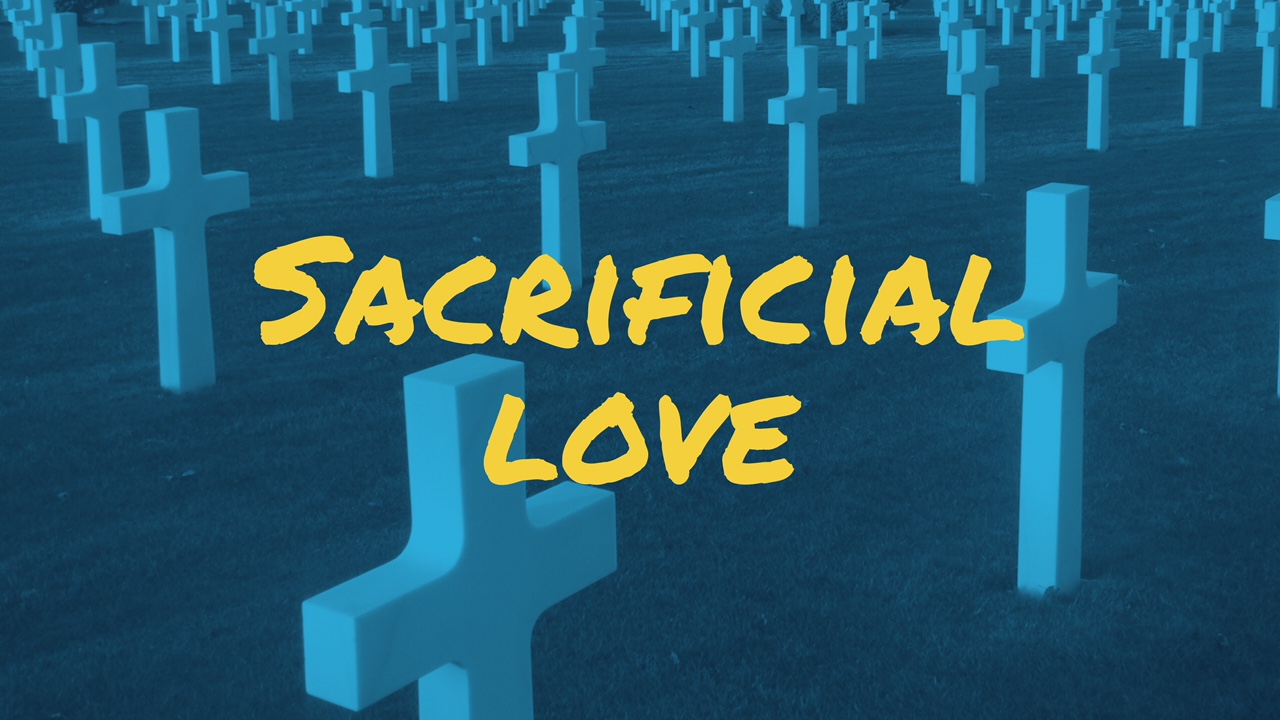 My command is this: Love each other as I have loved you. Greater love has no one than this: to lay down one’s life for one’s friends. — Jesus (John 15:12-13)

Love isn’t a feeling — at least it’s not just a romantic feeling; it’s also a decision, and an orientation of one’s will; it’s a decision to make a sacrifice of yourself for the people you love. Our approach to love in the west (apart from the more recent ‘sex=love’ phenomenon) is profoundly shaped by the image of Jesus laying down his life and calling people to do the same… what is incredible about Jesus’ death at the hands of the powerful Roman Empire and the religious establishment who hated him because he called them out for hypocrisy is that his death is not a picture simply of sacrificial love for those who love him — a reciprocal relationship — but of sacrificial love for one’s enemies in order to reconcile. That sort of love reshapes all the relationships built on it; and how one orients themselves towards life in this world.

“You have heard that it was said, ‘Love your neighbour and hate your enemy.’ But I tell you, love your enemies and pray for those who persecute you, that you may be children of your Father in heaven. He causes his sun to rise on the evil and the good, and sends rain on the righteous and the unrighteous. If you love those who love you, what reward will you get? — Jesus, Matthew 5:43-46

To love our enemies, sacrificially, is to echo the love of the God who made us, and to somehow be more in step with a fundamental part of reality; imagine a world where everybody practised this! Later, when Jesus was nailed to the cross in the ultimate act of hatred from the world, but the ultimate act of love from God. When Luke, who wrote ‘Luke’s Gospel’ — a biography of Jesus — described this moment he paints a picture of Jesus surrounded by hateful enemies, offering nothing but love.

When they came to the place called the Skull, they crucified him there, along with the criminals—one on his right, the other on his left. Jesus said, “Father, forgive them, for they do not know what they are doing.”And they divided up his clothes by casting lots.

The people stood watching, and the rulers even sneered at him. They said, “He saved others; let him save himself if he is God’s Messiah, the Chosen One.” — Luke 23:33-35

Love is what we see on display at the Cross of Jesus; and so this cross has become the world’s most recognisable symbol — it hasn’t always been used as a symbol of love — sometimes it has been a picture of hate, like the cross carried into battle by soldiers in some dark periods in human history, but it is also worn on the battlefield by medics who brave crossfire to care for the wounded from both sides of a conflict, or used to mark hospitals that care for the sick without favouring the wealthy or those likely to be cured — hospitals that emerged from history because people took the life of Jesus and his interactions with the sick, the socially marginalised, and the poor seriously…

The powerful symbolism of the cross as a picture of love and reconciliation is part of the appeal of following Jesus, but at an even deeper level this symbol represents God’s love for us, that the God who makes all things seeks reconciliation for our betrayal of him — our sin — our rejection of his rightful place in our lives and the cosmos. Sin makes us God’s enemies, God’s love for us in Jesus makes us God’s friends — more than that, his family.

Very rarely will anyone die for a righteous person, though for a good person someone might possibly dare to die. But God demonstrates his own love for us in this: While we were still sinners, Christ died for us. — The Apostle Paul (Romans 5:7-8)

The Apostle Paul is, like Jesus, responsible for the shape of the western world. His description of the love of God here wasn’t abstracted from his own life or experience. In the book of Acts (the fifth book in the New Testament), we meet Paul as a young man from the religious establishment responsible for hounding the church and killing Christians; he experiences the love and forgiveness of God and becomes the man who writes most of the rest of the New Testament. The love he talks about in that quote becomes vivid and real in the context of his life — he was clearly an enemy of God, a sinner (though he believed he was being ‘righteous’ and became part of God’s plans for the world.