Have you ever considered how small you are in the vastness of an infinite universe? How short your life is in the scheme of infinite time?

It can be pretty confronting… especially if you’re trying to figure out where to find direction for life, or meaning, or satisfaction…

We are so finite, so fleeting, while time and space are infinite.

There’s a book in the Old Testament called Ecclesiastes that deals with this sort of dilemma. It’s part of what is called ‘the wisdom literature’; and in the ancient world wisdom was all about how to live best in the world and coming to those conclusions (pre ‘philosophy’ or ‘science’) by drawing thoughtfully on our experiences of life and our observations.

Ecclesiastes can be a really depressing read if you just pull quotes from it; it’s one of those books you have to read from start to finish… but it asks us to consider what we put at the heart of our experience. What we love most and what we look to for meaning.

There’s a refrain through the book ‘meaningless, meaningless, everything is meaningless’ — it’s one of those parts of the Old Testament where the Hebrew word is a bit tricky to turn into English. Some translations use ‘vanity’ but one good possibility for how to understand the Hebrew word is that it is also a word used for the substance of ‘breath’ to describe something ‘fleeting’ and impermanent. Here one day, gone the next.

In the 1700s, especially in Holland, there was this trend to produce a ‘vanitas’ painting — which was a table featuring symbols of all the things a person looked to for meaning and pleasure in the face of death; of being ‘finite’… and the ‘face of death’ was literally represented with a skull, while the ticking clock was depicted as an hourglass. 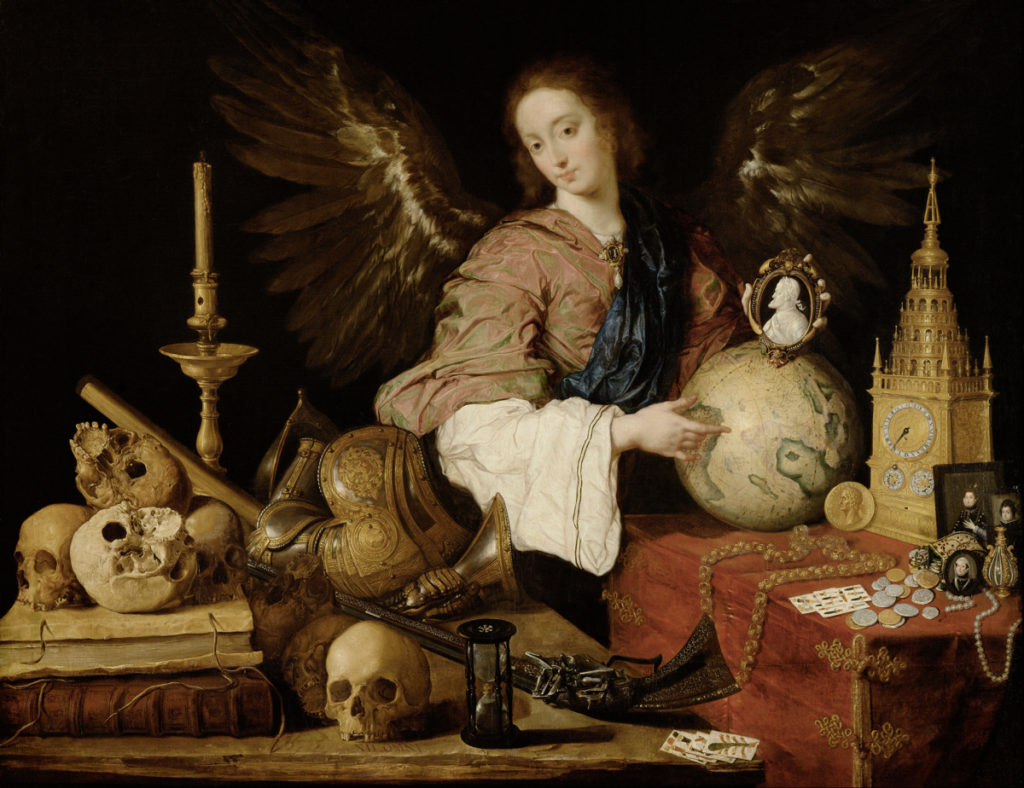 What would be in your vanitas painting? Is it stuff — even relationships — that will ultimately satisfy your longings? Will you look back from your death bed glad you’ve filled your life with the stuff on the table?

Does the good stuff — perhaps especially your loved ones — make you wish death wasn’t in the picture at all?

Ecclesiastes confronts us with our mortality… but also, paradoxically, with our desire to not just be fleeting — our desire to live, our fascination with the infinite…

“He has made everything beautiful in its time. He has also set eternity in the human heart; yet no one can fathom what God has done from beginning to end.” — Ecclesiastes 3:11

We crave something ‘eternal’ but can’t wrap our heads around the infinite nature of space and time. We are creatures caught up in the paradox of the eternal and the fleeting… Ecclesiastes suggests there’s this inbuilt desire we have for eternity — a desire novelist David Foster Wallace describes as the ‘gnawing sense of having had and lost some sort of infinite thing’.

Ecclesiastes drops this on us, then asks ‘what is the good life in the face of death with these desires in the mix?’

It suggests that there are lots of answers to this question that end in disappointment and disatisfaction; the ‘teacher’ who writes the book has tried many of them first hand… We try to satisfy that infinite desire with all sorts of finite stuff but, in the words of Ecclesiastes, it too is ‘breath’ or vanity. Vanity upon vanity. The things of this world that break or are finite — fleeting things — don’t answer our longings.

The answer the Bible gives both for our search for meaning and significance is that the universe isn’t infinite. God is. God holds the things that feel infinite to us in his hands. This, the belief that God is infinite, is a concept of God shared by both ancient philosophers and most religious systems.There’s a bit of the Bible where Paul (who wrote heaps of stuff in the New Testament) quotes a philosopher who said ‘in him we live and breathe and have our being’… What’s amazing about the infinite God of the Bible is that he chooses to become ‘finite’ in a particular way when Jesus, the ‘word of God’, becomes human. The infinite becomes finite — and becomes finite in order to give us eternal life.

Jesus brings the infinite and the fleeting together in order to satisfy that deep longing we have — especially the longings to not die and to not live in a world where things break down and disappoint.

The Bible suggests the real key to contentment, and thus to satisfaction, is not about escaping desire or not enjoying the world but about connecting with the infinite life of God and having that change the way we view finite things (the teacher in Ecclesiastes ends up in the same sort of place — it ends up suggesting we should enjoy good things in the moment, but look for real satisfaction in the eternal creator of those good things). It suggests we make this connection by trying Jesus.

Here are a few sayings from Jesus that help us stop misplacing our hope for meaning in things that can’t bear the weight of those expectations — the sort of things we might put in our own ‘Vanitas painting’ — and to start placing our hope in him as the ‘eternal one’ who invites us to share in eternal life. It’s clear that to understand Jesus properly — at least based on what records we have about what he said while he was alive — we have to understand that he sees himself offering the answer to this longing we have, and it’s one that doesn’t leave us as insignificant specks in time and space but as eternal beings who enjoy life beyond death with God.

“Do not store up for yourselves treasures on earth, where moths and vermin destroy, and where thieves break in and steal. But store up for yourselves treasures in heaven, where moths and vermin do not destroy, and where thieves do not break in and steal. For where your treasure is, there your heart will be also.” — Matthew 6:19-21

“Whoever believes in the Son has eternal life, but whoever rejects the Son will not see life, for God’s wrath remains on them.” — John 3:36

“For God so loved the world that he gave his one and only Son, that whoever believes in him shall not perish but have eternal life. For God did not send his Son into the world to condemn the world, but to save the world through him.” — John 3:16-17

“Very truly I tell you, whoever hears my word and believes him who sent me has eternal life and will not be judged but has crossed over from death to life.” — John 5:24

“My sheep listen to my voice; I know them, and they follow me. I give them eternal life, and they shall never perish; no one will snatch them out of my hand.” — John 10:27-28

Perhaps my favourite is from a scene where Jesus meets a woman at a well in the heat of the day — most women in those days gathered at a well to collect water closer to dawn, when the blazing sun wasn’t yet overhead… and so we get the sense that she is an outcast — and that she has been looking for satisfaction for this eternal longing in the wrong places (especially sex and love). She’s also probably quite literally parched from the walk out to the well in the middle of the day — so you imagine that a picture of refreshing water where you don’t have to keep trekking out, day by day, as an outcast is a pretty appealing metaphor for this woman who it seems, day by day, was also both making this pilgrimage to the well and other sorts of ‘pilgrimages’ in her quest for satisfaction and belonging.

It seems from the rest of this episode in John’s story of Jesus’ life and teaching that this woman finds what the teacher in Ecclesiastes was looking for — satisfying life ‘under the sun’… we’re just like that woman. Thirsty. Fleeting. Looking for satisfaction in things even more fleeting than we are…

If this cycle depresses you — if you have tried quenching your ‘thirst’ for life elsewhere… why not try Jesus. Today.